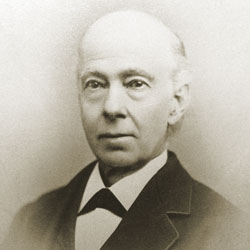 JOSHUA HENDY was born in Cornwall, England in 1822. At the age of 14, in 1836, he immigrated to New England with two older brothers, where working with his oldest brother in Chelsea, Massachusetts, he developed his natural mechanical ability as a blacksmith apprentice. Joshua subsequently moved to South Carolina working with his other brother for a few years, met and married his wife and then migrated to and started a blacksmith shop in Houston, Texas.

After gold was discovered in California in 1848, he sold his shop in Texas and used the funds to book passage to California to scout new opportunities.

Joshua arrived in San Francisco by ship on September 19th, 1849, at the age of 27, after sailing to the Isthmus of Panama, most likely taking the harrowing 70-kilometer donkey ride through the jungle and boarding a steam ship at Panama City headed for San Francisco. He was listed as a “California Argonaut” and was a member of the Society of California Pioneers. He explored the gold fields and forests of Northern California between 1849 and 1856, establishing the first commercial redwood sawmill in California by the end of December 1849, in the city of Benicia.

In 1856 he started the Hendy Machine Works as a sole proprietorship in San Francisco which went on to fabricate a large variety of iron and steel products and became the second largest iron and steel fabrication shop in that city during the last half of the 1800's. The Hendy Machine Works was incorporated in 1882 and greatly expanded the foundry and manufacturing capability and output until it occupied an entire block bounded by Bay, Kearny and Francisco Streets near the Embarcadero and opposite Pier # 35.

The company became famous for its manufacture of sawmill and dairy farming equipment. Hendy’s company was especially recognized for its expertise in a broad variety of equipment and plant designs for mining and ore processing, much of which would end up being manufactured and shipped throughout the western US, as well as other parts of the world. In addition, Hendy manufactured many municipal utility products, scientific equipment, farming equipment, industrial and construction equipment. Because Joshua would accept resources, including land, as payment for equipment manufactured, he became a developer of mining and sawmill sites throughout California.

On the discovery of gold in Alaska in 1880, Hendy founded a steam ship line to supply miners and settlers with transportation and products from California, Oregon and Washington.

Joshua lived in San Francisco and ran the company until his death October 21, 1891. 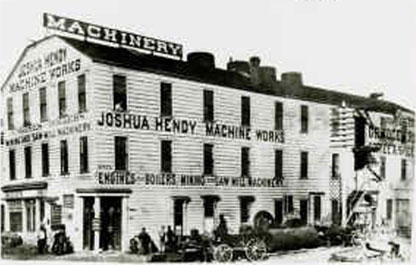 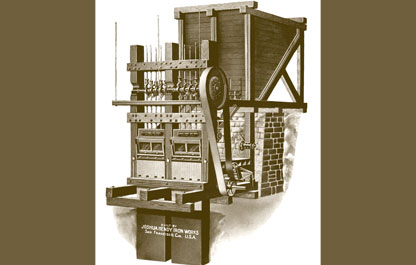 Stamp Mill for crushing ore. An original stamp mill can be seen at Murphy Park in Sunnyvale, at the corner of Sunnyvale and California Avenues.